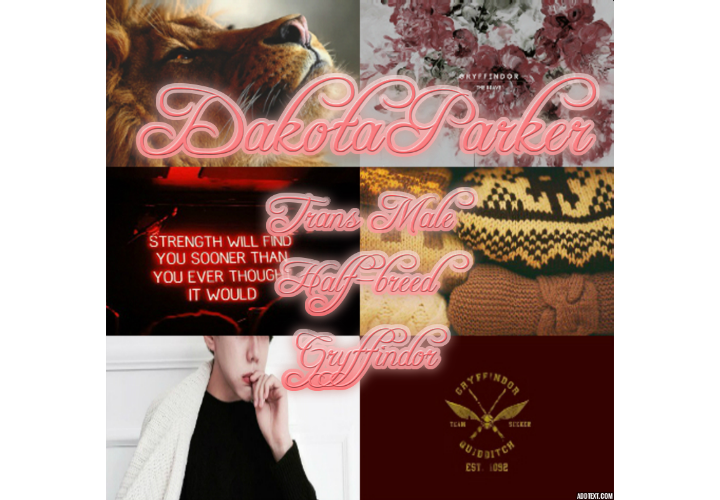 "Be humble in your confidence, yet be courageous in your character."

1st Year - Dakota is a very kind and excitable boy who really wants to share everything he has with the world. He wants to see more of everything and even take risks-he wants to stop being so self-centered and instead take action of his opportunities. Nevertheless, he’s still quite shy and quiet, but has learned to become more open with others. While he’s still jumpy and very careful about what he says, he has learned more social skills and is expected to make more friends as the years go by.

Father: Jack Parker
Mother: Samantha Mucci
Siblings: Allen and Damien Parker
Paternal Grandparents: Unknown
Maternal Grandparents: Rose Mucci
Adoptive Relatives: N/A
Pet: N/A
Family Home: Ivy Cottage
Blood Status: Pureblood
Social Standing: Upper Middle Class
Family Background: His father makes sure that Dakota knows little about his family background due to not wanting him to tell everyone about it. His grandmother, Rose Mucci, a Veela, married another Veela who's name is unknown and gave birth to Samantha,; beauty was so intoxicating that she was offered a job as a model early in her life. She soon became a popular actress, not having her mother's talent of dance to take the profession of a dancer. At the time, she wanted to date a bad boy and ended up marrying dragonolgist Jack Parker, who often showed her live dragons-at unsafe distances.  Samantha soon changed her job to an astronomer once she got pregnant, always having a passion for the stars and beyond. They ended up having three children: Allen, Damien and Dakota.

Dakota was born in London, England to a Veela mother and wizard father. He is the youngest of two-his older siblings being Allen and Damien. He had a pretty good childhood at first, and was incredibly active due to the grand amount of land surrounding their grand house. Dakota’s mother kept the fact that his father was a wizard and that his brothers were currently attending Hogwarts a secret. Clueless of this, he often played by himself whenever it was time for his brothers to go off to school, the boy spending time by a lake where he could watch all the wildlife pass by. Dakota then discovered that he was transgender at the early age of 8, the boy always having felt more masculine than feminine. He had rarely touched a doll after age 3, instead watching his brothers wrestle and play sports, the transgender boy deciding to do this too despite his small stature.
Soon, he began to participate in more masculine things, and on the verge of becoming 10, he finally told his family that he didn't want to be referred as a female anymore. His father despised of this highly, and not wanting to make their father angry, Dakota’s brothers showed their disapproval as well. Dakota was devastated when he got insulted in response, his father cornering him into a wall. This made Dakota involuntary shoot out a bolt of lightening, it hitting his father and causing him to faint. Confused and shocked on what had just happened, Dakota apologized, but his brothers just ignored his pleads. Panicked, his mother brought Dakota to a separate room and explained to him everything that he needed to hear.
After realizing that his brothers were attending Hogwarts and that he was a wizard, he was excited, hoping that he could attend the school too. However, he was pretty anxious that he was a half-Veela-the last thing he wanted to do being attracting other males. A year passed and Dakota turned 11 years old, the boy becoming more nervous than before. He had started to get bullied on by his brothers' friends and had even gotten abused by his father constantly, his brothers always warning him that at Hogwarts, no one would like him.
Of course, he believed that, and actually backed out on going to the school, not wanting to face that kind of treatment. His mother then insisted that he should go anyway, also telling him that he had to learn how to control-if not use his magic.
After at least two months of thinking on the pros and cons of attending this wizardy school, Dakota agreed to go to Hogwarts once and for all. He packed and got all of his things in check, saddened that he couldn't take his pets with him. He promised himself that he wouldn't cry on his first day and try to make friends instead, even if he got bullied. He knew that he would be seen as awkward to some kids if not most, but finally decided that any place away from his father would be good enough for him. So now here he is, trying to fit in....and hopefully graduate.
Last edited by Dakota Parker on 4th May 2018, 10:31 pm, edited 27 times in total.
You would not believe your eyes, if ten million fireflies~

[BEST FRIEND] : One of the first few friends that he had managed to make here. Dakota met CarMine when he was getting bullied by a Slytherin, the Hufflepuff saving him just in time before he got hexed. Over time, he became close to him, CarMine being one of the only people that he could trust.
~ Ike Corbec, First Year - Gryffindor ~

[ACQUAINTANCE] : The leader of the Rat Pack, Dakota respects Ike highly and will follow anything he says.
~ Sally Walker, First Year - Ravenclaw ~

[FRIEND] : They met when Dakota was handing out cookies and the two have had a stable relationship ever since. Dakota finds Sally’s company soothing and hopes that he’ll see her around more often.
~ Siege Aramastus Bal, First Year - Gryffindor ~

[ROLE MODEL] : Dakota looks up to Siege due to how tough and confident he is, and hopes that he’ll end up like him later in life. He has much gratitude for him, and barely protests against what he says.
~ Darius De Amoris, First Year - Gryffindor ~

[BEST FRIEND] : Darius is one of the first people that Dakota met, and have formed a strong connection with. The two are like peas in a pod and look out for each other, always enjoying each other’s company.
~ Evan Sylvanus, First Year - Hufflepuff ~

[FRIEND] : Dakota met Evan on the grounds, and got along with him quite well, Evan helping him soothe his worries about Hogwarts.
~ Mary Swan, First Year - Hufflepuff ~
[ACQUAINTANCE] : Dakota met her the same time that he met Evan, the two seem to both love pastries.
~ Kaiser Drakenfang, First Year - Ravenclaw ~

[ACQUAINTANCE] : Dakota didn't talk to him much but they have had a friendly meeting.
~ Venice Smith, First Year - Ravenclaw ~
[FRIEND] : Dakota's partner for potions class, the two pretty much get along.
~ Reid Kovacs, First Year - Hufflepuff ~

[ACQUAINTANCE] : Dakota met him in the astronomy tower at night, they have no real relationship yet.
~ Destrian Dayne, First Year - Slytherin ~

[ACQUAINTANCE] : Dakota met him in the astronomy tower as well, they have no real relationship yet but the chance of them becoming friends is high.
~ Sylvia Wight, First Year - Gryffindor ~

[ACQUAINTANCE] : The leader of the Modern Marauders, Dakota of course has respect for her.
~ Kyden Goodlow, First Year - Slytherin ~

[FRIEND] : Dakota met him in one of the classrooms,  and they got along quite well for two differing houses. They have similar interests and he feels very comfortable around him.
~ Sebastián Cazarez, Professor - Gryffindor ~

[ACQUAINTANCE] : Dakota’s professor and the one to accept him for Quidditch, they haven’t met formally but he respects him just like all the other professors.
~ Cameron Harper, First Year - Gryffindor ~

[ACQUAINTANCE] : Honestly, Dakota is a bit intimidated by him due to how much he talks but he doesn’t really dislike him.
Last edited by Dakota Parker on 4th May 2018, 4:12 pm, edited 35 times in total.
You would not believe your eyes, if ten million fireflies~

The Rat Pack
Exploring The Grounds
First Year Potions 101
Treats For All
Roommates
A New Feeling
The Blues
The Modern Marauders
A Final Beatdown
Escaping The Crazy
Quidditch Tryouts
Snowball Fight
Shooting Stars
Not Just Letters
Last edited by Dakota Parker on 4th May 2018, 4:14 pm, edited 3 times in total.
You would not believe your eyes, if ten million fireflies~


Reducio
He loves to nurture animals, sing, bake and dance.


Reducio
He's developed a fear of fire and people laughing at him when he messes up. He got burned by fire when his brothers tricked him to play with it, he also has a fear of heights when his brothers pushed him off of a roof, tricking him that he could fly because he was half-veela. Only certain people know that he fears his father and brothers.


Reducio
He has a great bond with animals and can attract people highly due to being half-Veela. He also has good agility and can move quite fast.

Reducio
He is very prone to injuries and is quite weak when it comes to physical strength. He also can be clumsy and easily get insulted.

Reducio
He has the ability to attract others supernaturally through his beauty, as he gets older he can somewhat shapeshift into a bird-like creature. Of course, at first, he can't control it and it happens because of certain emotions-such as stress.
Art:

You would not believe your eyes, if ten million fireflies~
Back   Reply