He sighed, fingers shoving at the high collared coat he'd been forced into on his way out the door. He'd wanted to wear a loose hoodie for the ride there but alas, the granny was fast when she wanted, downright terrifying it was being glared down by the woman as he tried to get past her. So yes she'd punished him in her own cruel way, forcing him into expensive clothes that, sure looked good but how was he supposed to take a nap like this, because of course how dare he try to get past her without a goodbye? Which, he had to admit he'd had no comeback for because yeah...he actually did forget to give her the goodbye hug she'd demanded the night before. She'd gotten the hug and his ratty but oh so soft hoodie in one go. The cunning woman...and though he loved her like family, merlin knows she was a godsend, he had to admit the clothing just put him in an even worse mood because well...

Elsian couldn't say he was very happy at his situation in the first place. He'd been dropped off with no one to actually see him off except the driver, who was literally just doing his job. It wasn't like he wasn't used to this from his parents, they were busy people after all, but somehow he'd thought it would have been a little different this time and yet here he was...Honestly he'd known deep down neither would show up for this but it still left a bitter feeling seeing as how his tutor had wanted to only to be shot down by said parents for fear of 'looking bad', because really what was that supposed to even mean? Letting him go alone was the more respectable look?

He scoffed, slipping through the crowds as he dutifully pushed his trunk along. It was crowded. Crowded enough for him to struggle through the onslaught of adults that all seemed to lack basic manners as they pushed along quickly, knocking into him on either sides. He hated crowds. Hated how stifling it all was and that made the minutes that ticked by as he shoved along feel like hours until he finally seemed to break through the thickest of the traffic and he found himself giving a sigh of relief as he noticed he was that much closer to platform 9 3/4 . Compared to what he'd had to get through to get this far the steady stream of people proved relaxing as he eyed his surroundings trying to pick out the area he'd been instructed to go to by his mother. It took a bit longer than he'd have liked but eventually he found the small bit of pillar he needed.

The lack of kids his age or...any other age for that matter left him a bit surprised. He knew he was a bit earlier than some people but not that early! Frowning, thin fingers gripped the bars of the trolley the slightest bit tighter as he started to question if he had the right spot but...no. Looking around he knew this was the right spot. He guessed the stories Mary told him actually did hold some truth to them if this was anything to go by. He wondered how many students actually missed the train vs how many would barely make it? Shrugging internally he moved forward, getting ready to run through the passage before noticing another person his age. A girl who was bracing herself and seemed to be getting ready to break out into full sprint. Frowning he eyed her path, eyes widening when he realized she was about to get one hell of a headache.

Gritting his teeth he weighed his options when it was obvious she did NOT hear him before letting go of his trunk to make a quick dash over to the girl when she broke into a sprint, slowed by her own luggage. Grabbing her by the shoulder, he pulled her away at the last moment, sending both of them tumbling sideways before she made a frontal attack against the brick that he had no doubt would have broken something. Possibly the girls poor cat if the cage put upfront, which oh wouldn't that have ended well?

"Trust me you do not want to do that..."he breathed, pushing himself up to stand with a little hiss.

"What?" she questioned, obviously a bit shook in the way her voice trembled as she stood up herself, "but isn't that-" she paused eyeing him, "platform 9 3/4?"

There was a moment where the girl seemed to hesitate but she nodded, following behind him as he quickly moved to get back to his own things. Pushing his own closer to the wall he gestured to the brick, looking over to the mystery brunette.

"This is where you go through," seeing her worry when he stepped forward to go first he paused before moving back to give her space, "you go first, something goes wrong I'll be here." He couldn't bring himself to be annoyed by her incompetence when she gave a watery eyed thanks.

Running forward he barely kept in the flinch that wanted to break out when the other met the wall, half expecting the sound of a loud crash. Relief washed over him when she passed through like magic. He waited a minute, slightly fearing the other wouldn't have gotten out of the way before straightening his own cart and running forward, closing his eyes as he braced for an impact that never came. Elsian opened his eyes at the sound of a train whistle eyeing the new area and releasing a breath he hadn't realized he'd been holding.

"That was troublesome..." he muttered half heartedly, moving away from the entrance in case anyone came through suddenly. Brielle, now helpless and alone due to her mom dropping her off, stood by all of the trains, squinting her eyes to determine which wall she should run face first into. It seemed silly to her, running straight through a wall and it magically brings you to another station. All ends well in magic she guessed. Though, she couldn't find 9 3/4! Unsure, but confidently, she stood in front of a wall and readily braced herself for impact. As she began to run, a boy tackled her right before hand. Brielle shoved him off of her and glared at him, her beautiful features now placed in an angry expression. Though she studied him, marking and taking note of his features. He had shiny, what looked to be soft grey hair, emerald green eyes and a sharp jawbone. He was what was considered attractive in most stereotypes, though his appearance didn't dilute her frustration in the slightest.

"What the bloody hell do you think you're doing tackling me like that?!" She screamed, quite flustered and shaken up.

"Trust me you do not want to do that..." He had replied, ot mentioning or apologizing that he so rudely ran into her. "And why is that, hm? That was my way to 9 3/4 idiot! She remarked, her posh accent strong. He then began to point at a different wall, her eyes followed where it had said 9 3/4. She then brushed her clothes off and followed the boy to the actual entrance.

Brielle braced herself for what was now the second time, hoping her dear cat didn't get hurt. As she smiled back at him, she ran into the entrance and was greeted by others her age on the other side.

Curiously, she looked around to spot her 'rescuer', and noticed he was standing by himself out of the way. She approached him slowly and formed a smile. "Thanks for.. sparing me from embarrassment back there."

He was a bit surprised when the girl approached him, typically people didn't stick around him, at least not people his age. He assumed she'd have been gone already, off to meet up with friends or something and he half expected the other to walk past him. Blinking he stopped in his tracks as the other approached, half heartedly resisting the instinct to hurry off and find a seat on the train, though that thought was quickly wiped from his brain when she actually spoke.

Suddenly he felt very embarrassed for his poor manners. What would granny have said if she found out? Gods what would his parents do? He hadn't even offered an apology for pushing her over in his haste! He could just see their reactions, after all what if the press had seen? Oh they'd have a field day surely. 'Elsian Cox, heir and only child, tackles fellow classmate in middle of station.' He could say goodbye to any free time he had before, not after Mary got ahold of him...

"Oh...it was nothing," he muttered weakly, "I'm sorry about pushing you, I did try to call out to you but..."he frowned, brow furrowing, "you were really concentrated back there."

Straightening Elsian offered a hand, instinctively falling back into the manners he'd been taught, "I'm Elsian Cox, it's a pleasure, despite the...poor first impressions," he laughed, a small light thing that matched the slight quirk of his lips 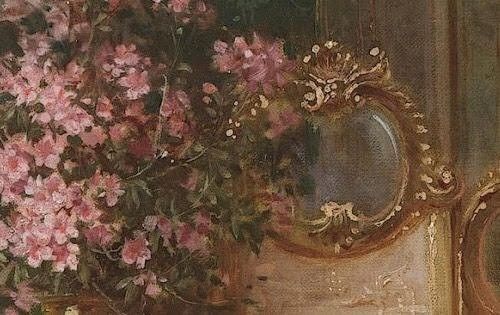 Brielle stared at the boy sadly, realizing she too could have been nicer back there. He was only trying to help.. and her short temper grabbed hold of her again. As she pulled a strand of snow white hair behind her ear, she took the boys hand and shook it with a grin.

"I suppose I could've been nicer too.. with the 'bloody hell' and all. My name is Brielle, and I suppose we're even now, huh?" With her sly smile, she heard the final whistle of the Hogwarts train. Without hesitation, she grabbed his hand once more and dragged him to a booth on the train with her. Maybe it was weird, yes. Okay, yes, it was very weird to force a stranger to sit with you, but Brielle did it anyway, not having the slightest remorse.

As they sat down across from eachother, she examined him. Brielle did this to all the wizards she met, trying to determine their house. For Brielle it was obvious, with her confident stride and somewhat rude demeanor, called every characteristic of Slytherin. This boy though.. She couldn't quite figure it out. He had went to help her, and helping others rather than yourself for sure isn't Slytherin. He had seemed to be shy, though maybe he was just embarrassed from what happened.

Brielle then sat up straight and looked at him with a sparkle in her eye. "What house do you think you're going to get sorted into? My mum didn't even go Hogwarts so I don't know what to expect."

"Guess so," he admitted with a tiny smile.

It was all kinda a blur. Though they'd been able to slip on before the rest of the crowd mainly due to the people seeing them off. For the first time today he actually somewhat grateful that he'd just been dropped off because looking at some of these families there was little doubt in his mind Mary would have been one of the adults keeping him from getting on out of worry. Probably try to go over a checklist to make sure he had everything the spaz...

He never admit it. Take it to his grave before ever even playing with the idea of saying his thoughts aloud but despite the surprise and the...feeling of being a bag of luggage with how she dragged him around...it was kinda, how do you say. Comforting? Yes, comforting to not be totally alone for the trip.

Typically he'd have ripped himself out of the grip of someone trying to drag him around but this time, he'd let it slide.